It had been several months since we’d taken a hike along the Oregon Coast so for a change of pace we headed to Pacific City to check out Cape Kiwanda and Bob Straub State Park. We parked at the lot for Cape Kiwanda near the Dory Boat Launch and started our hike by heading over to the cape. Haystack Rock rose from the ocean just beyond the cape while seagulls patrolled the beach.

After a little exploration on Cape Kiwanda we retraced our steps and headed out to the tide pools next to the cape. The tide was out far enough to reveal several starfish and anemones.

We then headed south along the beach toward the Nestucca Spit and Bob Straub State Park. Vehicles are allowed on certain parts of this beach but only a couple came down and none stayed long. Several flocks of seagulls were gathered along the beach as well as a handful of other ocean birds.

When we reached the end of the spit we turned along Nestucca Bay to make a loop around the spit through Bob Straub State Park. More birds awaited us in the bay including some ducks and a heron.

We also saw many clam shells and a couple of nearly complete crabs. We enjoyed watching the seagulls pick up the clams, fly them into the air, and then drop them.

We originally missed the trail that would take us from the bay shore across the spit to a forested trail network. When we reached an impassable estuary we turned around and located the correct path. We found a surprisingly dense and scenic forest waiting for us in the middle of the spit. Moss covered the ground and many trees while bright colored mushrooms dotted the green carpet. A few flowers remained in bloom even as many of the leaves showed their fall colors. 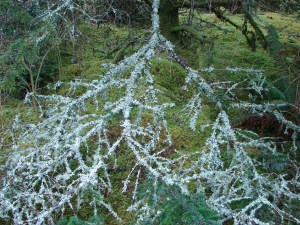 There was a confusion of trails in the forest and absolutely no signs indicating where any of them went or which was the correct one to reach the park. We eventually found ourselves in a meadow along the Nestucca River. The trail we were on went down to a nice little beach along the river where it promptly ended. We turned back around and took a different path only to wind up arriving at the same meadow from a different direction. At that point we had already been on a couple of overgrown paths and I was getting a little irritated at the lack of signs. It was time for drastic measures so we turned to the gps and struck off on a faint game trail in the direction of the park. This worked out fairly well as we wound up popping out of a thicket of scotch broom on an old road less than 50 yards from the parks entrance road.

We walked to the parks parking lot and then followed a short trail back to the beach and headed back toward Cape Kiwanda. One the way back we encountered the largest flock of seagulls we’d seen all day. They took to the air as we passed by making for a scene straight out of the movie The Birds. As I was busy taking pictures I realized I was a sitting duck and should probably move before I was hit by a seagull bomb.

Despite the constant presence of gray clouds we had only had a couple of short bouts of rain until now. We escaped the seagulls only to be met with a sudden uptick in wind followed by a heavy sideways blowing rain. The rain let up just before we reached the Dory Boat Launch and our car where we dried off a bit and then walked across the parking lot to the Pelican Pub & Brewery for some lunch. http://www.yourlittlebeachtown.com/pelican
The food was great and the view out to Cape Kiwanda and Haystack Rock made for a perfect end to an interesting beach hike.
Happy Trails.