HOT! That certainly describes our recent visit to Silver Star Mountain, but that would be doing this hike a great disservice. Despite the 90 degree temperatures better descriptions would be amazing flowers, great views, and beautiful scenery. Silver Star Mountain is located in Washington State’s Gifford-Pinchot National Forest between Mt. St. Helens and Portland, OR.

I’d been wanting to visit Silver Star for a long time, but the timing hadn’t been right until now. I had seen a number of trip reports which indicated now was a good time to catch many of the wildflowers that fill the meadows and the weather called for clear skies, the perfect combo. There are a number of possible approaches to the 4390′ summit but for our hike we chose to approach from the north via Ed’s Trail.

The drive to the trail head was tedious with the last 9 miles taking a good 45 minutes due to poor road conditions. Our plan was to hike a big loop sampling as much of the area as we could so we knew we had a long day ahead of us. It was already over 60 when we arrived at the parking area at 7:15. The sky was clear and the birds were out in force as we headed up the north flank towards the junction with Ed’s Trail. Mt. St. Helens loomed behind us and as we climbed Mt. Rainier and later Mt. Adams joined the horizon. As we approached the junction with Ed’s Trail Mt. Hood appeared through a gap ahead surrounding us in Cascade peaks.

Already the flower display had been amazing. The variety of flowers was one of the best we’d seen. There was red paintbrush and columbine, pink nootka rose, purple lupine and iris, orange tiger lilies, white beargrass and thimbleberry, and (new to us) yellow lupine. The meadows here are due in large part to the 1902 Yacolt fire which swept over Silver Star Mountain removing the trees and clearing the way for the flowers. I could easily fill this whole trip report attempting to describe the flowers we saw on this day but the hike had other things to offer as well so I will have to let our photos do much of the flower reporting. 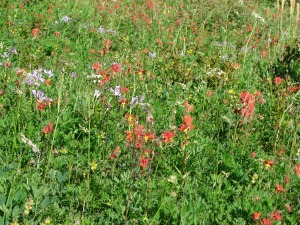 Ed’s trail was truly scenic as it traversed the NE side of the ridge through wildflower meadows with views of the 4 snowy Cascade peaks. Soon the path passed some rocky areas and passed through a natural rock doorway. Not long after passing through the doorway we scrambled up a short, steep section of the trail as it passed through a rocky slot up to a great viewpoint. A small patch of snow remained surrounded by avalanche lilies.

When Ed’s trail met an old road we took it up to the twin summits of Silver Star mountain. The view from the north summit was a true 360 degree panorama. Mt. St. Helens, Mt. Rainier, and Mt. Adams were joined by snow covered Goat Rocks to the north while Mt. Hood, Mt. Jefferson, and the faint Three Sisters rose to the south. The Columbia River and Portland, OR lay to the SW while the ridges and meadows of Silver Star Mountain surrounded us in every direction.

After leaving the summit we continued on to the Indian Pits trail to visit a series of rock pits used as vision quest sights at one time. More wildflower meadows awaited on this trail which ended at a rocky ridge endge with yet another set of wonderful views. As an added bonus we were serenaded by a resident swallow who appeared to be enjoying the view from the top of the rocks as much as we were. It was really starting to warm up as we left the pits and continued on our loop down an abandoned road past sturgeon rock. The old road was actually lined with trees but it was wide enough to remain in the sunlight.

We made our way down the road to the Tarbell Trail which we then turned right (north) on and momentarily entered the forest. The trees didn’t extend far to our left and we could see that much of the hillside below had been clearcut. It is a sight that I don’t particularly enjoy seeing. The stark contrast of the stumps and piles of slash next to the still standing forest always leaves me imagining what it must have once looked like. We were on a collision course with the cut though and soon emerged to the treeless hillside. One of the first things we noticed were the butterflies. They were everywhere and flitting above a vast array of wildflowers. Even the clearcut couldn’t spoil the areas scenery 🙂

The lack of trees did mean we were once again exposed to the sun and for about 2 miles we switchbacked down and across the hillside before again reaching the forest on the other side. We were greeted by the first sound of water on the hike. The source was Coyote Creek and that was where we would find our next destination, Hidden Falls. What a welcome change to the heat Hidden Falls was. A bench near the 92′ cascade gave us a place to rest while we cooled off courtesy of the breeze created by the falls.

After another mile and a half on the Tarbell Trail we arrived at the Chinook Trail which would take us up Kloochman Ridge and back to the road we had been on early in the morning. The Chinook trail spent a short time climbing in the forest before emerging in some of the hikes best wildflower meadows. The number and variety of flowers on this ridge trumped all the others we had been through on this day.

This was also the steepest trail we’d been on and with the temperatures hitting the 90s we needed all the distraction the flowers could provide.

We eventually made it up Kloochman Ridge and then headed back down the road to our car and the extra water that was stashed in our cooler. This was one of the rare occasion when I actually finished off all the water in my Camelbak (1/4mi from the car). Silver Star Mountain had lived up to all the hype I’d seen in the trip reports. With a little something for everyone it’s an amazing area and I highly recommend exploring any of the areas trails. If you’re a fan of beargrass skip next year since it only blooms every 2nd or 3rd year and this year it was on, or better yet go both years and see the difference. Happy Trails and have a safe 4th of July.